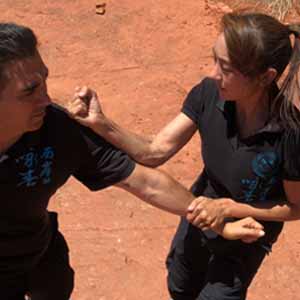 Most men are taught that they shouldn’t hit women and for good reason. My own mother was a victim of domestic abuse. I am familiar with the pain it causes all of the people involved including the children. We must teach all of our men (and women) that violence is unacceptable. No person should suffer abuse at the hands of someone else. What happens, then, when a man is expected to train with a woman in his martial arts class?

Most men are taught that they shouldn’t hit women and for good reason.  My own mother was a victim of domestic abuse.  I am familiar with the pain it causes all of the people involved including the children.  We must teach all of our men (and women) that violence is unacceptable.  No person should suffer abuse at the hands of someone else.

What happens, then, when a man is expected to train with a woman in his martial arts class?  The instructor tells him to throw strikes at her, to grab her, to punch at her or even to take her down.  For many men, it goes against everything they’ve been taught. And as a woman, I appreciate that.  But as a martial artist, delivering a lack of force towards a woman training partner is dangerous and ultimately may put her in jeopardy.

I have put together training tips for men who train with women and for women who train with men.  However, please read both.  In no way do I mean to over-generalize circumstances, especially in terms of gender.  Clearly both set of tips can also apply to the opposite gender or to someone who doesn’t identify as either gender.  Rather, the tips are meant as a means to elevate and empower all.

You don’t know the ability of the Wing Chun woman who stands before you.  This is true of any gender and equally so for a woman.  The respectful thing to do is always assume your partner is more skillful than you.  Ego has no place in martial arts and is the exact opposite of the nature of Wing Chun Kung Fu.

A woman needs the correct amount of speed and force delivered to her as much as you do.  In Wing Chun, we are taught to not rely on our muscle or strength.  Taking it too easy on a woman is a disservice to her.  It is critical that she learns how to deal with force inside of the kwoon, so that if she is attacked outside of the kwoon, there is not a disparity between her training and reality.

However, we must make sure that our training is level appropriate, as with any gender you are training with. A great rule of thumb is that if you have more experience than your partner, then train at a level that is just a little bit above their level.  This is how we can help lift them to even a greater level of skill.  Training to prove your skill is only feeding the ego and dangerous.  Training without a thought to your partner’s needs is selfish and harmful.

So, how do we become better training partners for all of our tung moon, woman or man?  Communicate.  Ask if your partner if he or she feels comfortable with the force you are delivering. Are they ok if you hit (make contact) or if take them down.  You do not know if your partner has injuries, or if they have past trauma they are working through. It shows caring and respect, which is the best approach to your training. If you do this, you will get more out of your own training than you ever thought possible.

Any Wing Chun Training should be approached with the question, “How can I best be of service to my partner?”

Clear communication is the key to effective and enjoyable training for everyone.

Too often women demand respect from others because they do not give it to themselves first.  If your Wing Chun training partner does not give you the force you need, do not assume it is because he doesn’t respect you or your skill.  If you become triggered and frustrated when a partner does not give you the training you hope for and demand respect, flip that mirror back on yourself and ask yourself if you respect your own ability, skill and power. More than likely, you do not.  And why not?  Treat yourself like the powerful woman you are.

Often by demanding respect of others in itself is a disrespectful act to the person we are demanding it from.  No one owes us anything; we owe what we are looking for from of ourselves.  When we give ourselves that which we seek, we will automatically give it to others because we have it to give.

2. Beware of Trying to Prove Yourself

Ego has no place in Wing Chun or in any martial arts arena.  Even if someone, man or woman, does not respect your skill and ability, it is about them, not you.  The need to prove your ability and skill comes from a lack of confidence.  Your Wing Chun training is for you and no one else.  Do not give your power away to anyone else by playing the game of proving your worth.  If someone does not respect your skill, and it becomes a problem for you, simply do not train with them or approach your instructor about the situation, if refusing to train with them is not an option.

In my experience, when another student, man or woman, does not respect the skill of their training partner, it will not be remedied by teaching them a lesson.  The disrespecting student did not “learn his lesson” by being out skilled or hurt.  Trying to prove your own worth will only trigger your training partner’s ego.

Just like men, women must communicate their needs to their partner.  If your training partner is not giving you enough force, simply ask them for a little more.  If they are giving you more than you can handle,  let them know.  Just remember that others cannot read our minds, and too often we expect them to and get angry when they don’t.

If you haven’t already, please read my advice for men training Wing Chun with women. The communication advice given there applies equally to women training with men.